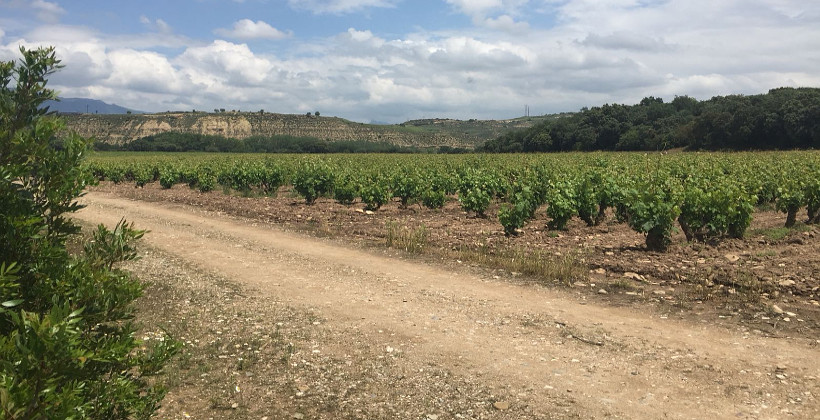 It comes as no surprise that La Rioja is Spain’s wine-growing region par excellence. Its climate and geographical features, as well as its vine-growing tradition, make it the ideal place to make the finest wines.

One of our wineries, Finca Valpiedra, stands on a land that is as peculiar as the quality of its wines requires. It lies in the heart of La Rioja Alta, straddling two villages that have been well-known for their winemaking tradition: Cenicero and Fuenmayor. The river Ebro bends its way through them, right by our Finca.

Many of the estate’s characteristics can be attributed to the river. It has an impact on the composition of the soil, protects the land against the summer heat and regulates the values of soil moisture.

Finca Valpiedra is surrounded by 80ha of vineyards spanning three natural terraces that lead down to the river. On the terraces are 14 different plots at an altitude between 427 and 406m.

The alluvium deposited by the river Ebro turns its valley into an ideal area for farming. At Finca Valpiedra, the sandy-loam soil, with medium limestone content, is covered in river stones, hence the name ‘Finca Valpiedra’ (‘piedra’ means stone in Spanish). The topsoil retains heat and prevents dehydration by retaining water as well, especially on hot summer days. This is why at Finca Valpiedra we start harvesting two weeks earlier than in the vineyards nearby.

Gravel soils are not frequently found in La Rioja. They lend a unique character to the wines produced in Finca Valpiedra, which are well-structured and have a balsamic finish and a mineral aftertaste.

Finca Valpiedra enjoys a singular microclimate that combines Atlantic and Mediterranean elements, with long, chilly winters and sunny, hot summers. The area also receives the influence of the Sierra de Cantabria on the north and the Sierra de la Demanda on the south.

During the night, the lower temperatures prevent grapevines from dehydrating, and the river Ebro protects them naturally against winter frosts. In the summer, the higher temperatures have an impact on the production of tannins and other polyphenols that add body, colour and ageing ability to the wines.

In this really special natural setting, we established Finca Valpiedra in 1999. Built in the classical Bordeaux style, it is the only winery in La Rioja belonging to the Grandes Pagos de España (GPE) association. At Finca Valpiedra, we make two wines only: Finca Valpiedra, our flagship label, and Cantos de Valpiedra.