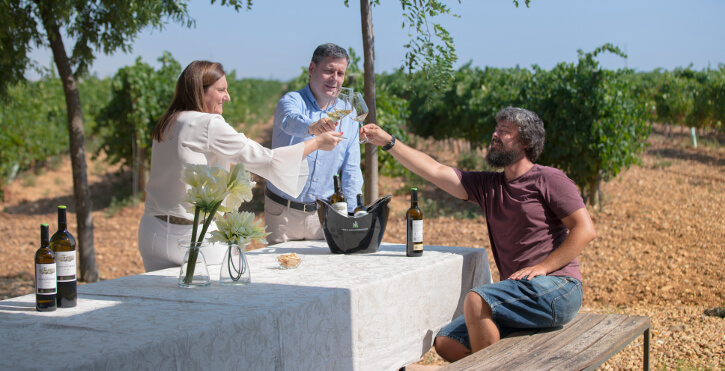 The visitors to wineries in Spain are mostly women who travel by car with their partners. Their average age ranges between 36 and 45 years old. They spend the night – generally two or more –, in the towns where the wineries stand, and book their accommodation online. These are the characteristics of winery visitors in Spain according to the 10th Report on Wine Tourism in Spain.

The Spanish Association of Wine Cities (ACEVIN) has recently published the Report on Wine Tourism in Spain 2018-2019 through the Spanish Wine Tourism Observatory. The survey analyses what visitors to wineries are like, their profile and preferences.

The great majority of wine tourists travel by car, either rented or self-owned vehicles (85.5 per cent). As to accommodation, most visitors stay in hotels (41.9 per cent) and country homes (23 per cent). They stay for an average of 2.4 days and travel with their partner (44 per cent) or group of friends (29 per cent). 60.48 per cent of them spend the night in their destination.

Wine tourists tend to use online sources to make bookings: whereas 50.9 per cent use email or other online booking systems, while 29.2 per cent book their hotel stays over the phone. Almost 20 per cent (19.9 per cent) learned about their wine tour on the Internet, while 21.8 per cent did so through winery websites or social media.

What activities do winery visitors engage in?

Even though the average length of stay has dropped from 2.43 to 2.4 days, tourists engage in a wide range of activities. Top of the list are winery tours, of course, done by 84.4 per cent of visitors.

With a considerable rise as compared to last year (+15 per cent), trips to nearby towns and villages are taken by 63.5 per cent visitors to wine regions. The third-favourite activity is eating out in restaurants and bars (56.5 per cent), followed by wine tasting (52.3 per cent). Moreover, almost half of the visitors to wineries (48 per cent) buy local wine.

Other things tourists do in wine regions in Spain are going to wine museums (27.3 per cent), spending time outdoors (25.8 per cent), engaging in cultural activities (23.9 per cent), visiting vineyards (17.5 per cent), attending wine-related events (10.7 per cent) and taking wine tasting courses (8 per cent).

As to the reasons for visiting, a large number of tourists want to visit a particular wine region (40 per cent), while 36.3% take a wine tour as part of their holidays, 5.7 per cent are interested in local gastronomy, 5.3 per cent prefer culture and 3.3 per cent go for natural areas.

With regard to wine tourism expenditure, it has reached a plateau following many years of considerable growth. The average daily expenses are 160.2 euro. They are still higher than the expenses of inbound tourists in general (146 euro/day, according to the latest INE-EGATUR report), national visitors spending 47.70 euro a day (source: FAMILITUR). Visitors to wine regions in Spain spend an average of 384.51 euro per trip, a little decrease in expenditure as compared to last year (393.38 euro).

Customer satisfaction in the following tourist services is also high: wine museums (8.39 points), wine bars (8.26), tourist information and service (8.24). The areas with the lowest levels of satisfaction are tourist signage (7.58 points) and roads, trails and infrastructure (7.64).

The three estates owned by Familia Martínez Bujanda form part of wine tours: Finca Valpiedra belongs to Rioja Alta, Finca Montepedroso is on the Rueda wine tour and Finca Antigua is part of the wine route in La Mancha. You are kindly invited to come visit us!