The harvest, a unique walk through its history 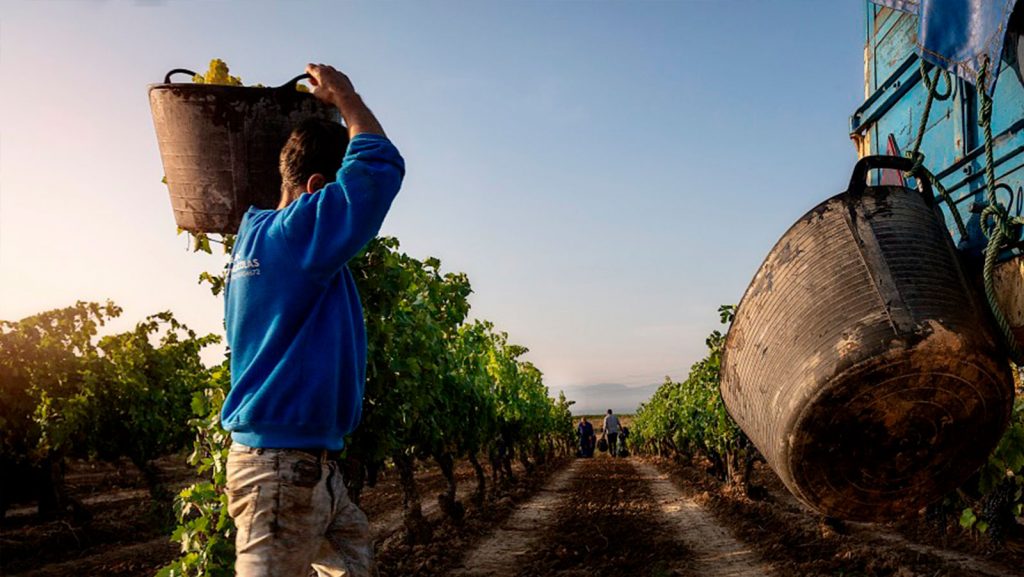 Do you know who were the first to pick the grapes from the vines and crush them into a wooden bucket? Many people believe it was the Greeks, but it was not. In this post, we tell you who started this work called harvest, the harvesting of the fruit of the vine, which has remained almost intact to this day.

The development of viticulture

It was originated by the Egyptians, who developed this practice for the first time with a certain degree of technique, despite the years that separate us. The process was very similar to what we know today: the bunches of grapes were harvested from the vines and placed in baskets that were transported to a press. This process was carried out by the grape harvesters.

Wine, at that time, was considered a divine drink that was enjoyed only by the nobility and royalty. It was common to mix it with honey and other aromas that softened its character.

Wine acquired a social and relevant character in Greek and Roman society under the protection of the god of wine, Dionysus for the Greeks, Bacchus for the Romans. In honor of this god, innumerable festivities were celebrated, such as the famous bacchanals.

The grape harvest in Spain

The arrival of Christianity in the Middle Ages had a great influence on the world of wine. The crops were located around the monasteries and their production was destined for the liturgy and food. In the case of the Cistercian monks, the daily consumption of a glass of wine was part of their diet, and the common people included it in their usual diet.

From its origins to the present, the technological advances that occurred at the beginning of the 19th century have been transcendental for the evolution of the grape harvest.

We must take the history of La Rioja to contextualize the period of expansion in Spain, with the arrival of Basque and later Jerez capital to invest in new wineries in what was then the only prestigious wine area in the country. This capital, in many cases financial, was invested in winemaking with the introduction of stainless steel and other technologies, in a Spain that was beginning to enjoy wine as a consumer product beyond as part of the diet that winegrowers and other agricultural workers needed for daily work.

For years, the harvesters were the ones who picked the grapes and selected in the winery which ones were suitable for producing the wine.

The ‘industrialization’ of the sector, first in the 19th century with the arrival of French capital in La Rioja to guarantee the supply of grapes after phylloxera devastated the Bordeaux vineyards, and then in the 20th century with the investment of financial and industrial capital, they raised the wineries to the consideration of companies.

Harvesting began to share space with technology when the traditional goblet vineyards gave way to trellis plantations in search of better yields. In this sense, the trellis meant that the plant was trained in a more open way to achieve greater exposure to the sun and better aeration, thus reducing the risk of fungal diseases. In this way, a higher population density and a better use of space was achieved, as well as more uniform clusters both in size and ripening. This system also facilitated certain mechanical works, including harvesting by machine.

Founded in 1889, the first Familia Martínez Bujanda winery has become a unique space, a museum, an authentic place of wine worship.  Located in the upper part of the town of Oyón, it allows visitors to appreciate the winemaking and ageing techniques that were used more than 100 years ago in La Rioja.

The winery is distributed on three different levels, to take advantage of gravity in the winemaking process.

How was the wine made?

The grapes were received by means of “comportones”, which were deposited in open lakes. The grapes were then lightly crushed, and the wines left to ferment for 8-10 days. Once fermented, the wine was separated from the paste to make four fractions of different qualities, which could then be blended or not.

The first fraction was the ‘tear wine’, the one that came out by gravity.  The second was the standing wine, which came out by stepping on the pasta.  The third, the “remango”, which consisted of treading half a lake on top of the other.  The fourth, finally, came from the press.

The fusion of tradition and technology.

The latest advances and the idea of going back to the origins propose a return to concrete tanks for the fermentation and ageing of wines. Its use was already common in the early days, but stainless steel became popular in the 1970s due to its easy cleaning and ability to control temperature, relegating concrete to a secondary role. This material has been revalued again with concrete eggs, which are now widely used for ageing some white wines on lees, and smaller cement tanks for the micro-elaboration of exclusive wines.

The technological revolution, trends and constant evolution make the process change, but at Familia Martínez Bujanda care and dedication to fruit is always maintained. Respect for the environment and sustainability are at the origin of everything.

We are proud to belong to families that have incorporated a fifth generation and we are convinced that success has a lot to do with respect for the identities of the terroirs and getting the trends right.