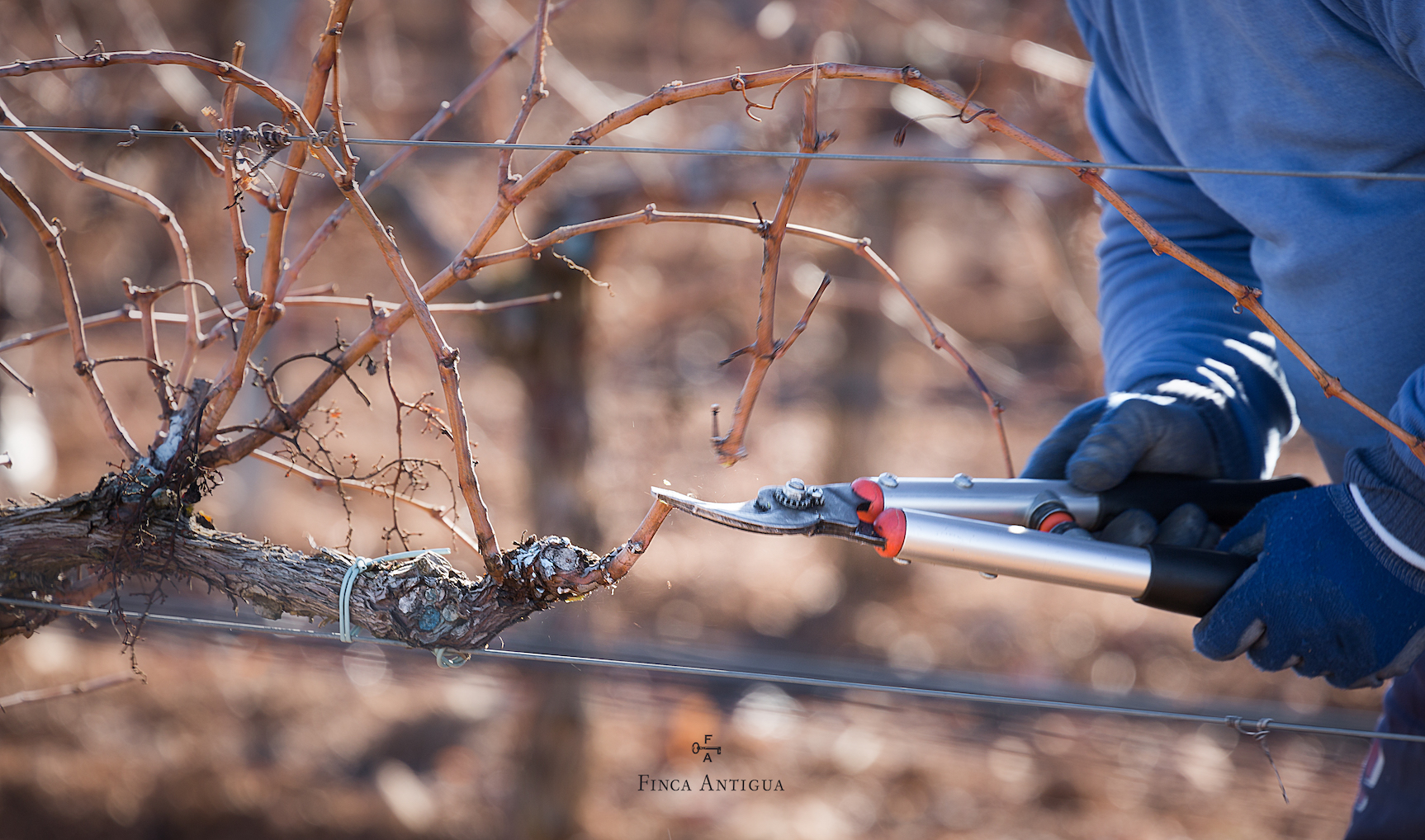 Pruning is one of the most important tasks to carry out during the winegrowing cycle. The pruning season starts right after the first few frosts, as leaves start to fall and the winter rest period begins. It can extend all the way into mid-March, just before the plant ‘awakens’ and renews its vital cycle.

Historically, pruning has been one the most important jobs for winegrowers, given that there is a fair amount of evidence on this technique happening in ancient times where Greeks, Romans and Arabs ascertained that, when their domestic animals’ appetite led them to eat the more slender parts of the vine shoots, the next harvest would have bigger bunches and grapes.

Pruning allows us to orientate, regulate and balance the plants vegetatively. The first consequence of pruning is that we can use it to direct the vines towards an elevated production or towards controlling its performance, which is what we do at the Familia Martinez Bujanda cellars. The attainment of wines presenting characteristic of its surrounding environment is only achieved with balanced plants, with enough vegetation to support adverse weather conditions such as drought, for example. This vegetation can’t be excessive either though, as it could ‘consume’ the sap and nutrients that the vine shoots and grapes need and become couterproductive.

Pruning is a delicate procedure, it basically entails ‘amputating’ or cutting organs from the plant. Therefore, we have to be very careful with the ‘wounds’ we make, as they have to be adequately disinfected with appropriate products so that these heal correctly. In this sense, we prefer pruning as soon as the first signs of cold weather arrive in Winter. At this point, the vine shoots will be dry, the cuts will be clean, and the wood will be well ‘healed’ when the active life cycle is restores. In general terms, it is convenient to avoid days with fog or high humidity to perform these labours in order to favour wound healing.

It is possible to distinguish various types of pruning: formation pruning – where the plant is formed according to the conduction system; production pruning – the one done every winter to balance the vines; rejuvenating pruning – this consists in cutting dry arms of the vine due to the age of the plant or because of diseases, leaving new vine shoots to substitute them; and exceptional pruning – here we act due to unforeseen circumstances which damage the vines, such as frosting or hailing, for example.

As a general norm, in weak vines and fruiting canes we usually leave short spars and not many basal buds, so that these plants produce less and recover themselves. On the other side, when the vines are stronger, we do the opposite in order to control their robustness.

We have had a fairly strange Autumn and Winter seasons, some of the warmest ones in history and with limited rainfalls. We will see if the traditional Winter cold returns this month of February, or if the benign meteorology we are currently living continues, which would lead to an early sprouting. For now, this Winter’s job – pruning – has already been done, and we will have to see when do the vines awaken from their lethargy.