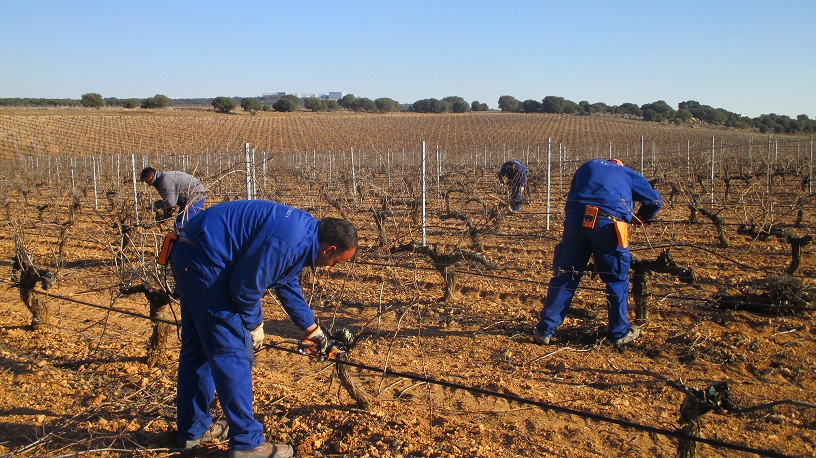 Winter is coming to an end and the vines are starting to show new signs of life. Some vineyards have already seen the first ‘weeping vines’, which is really an exudation which occurs in pruning wounds at the end of the winter or beginning of spring, particularly on days where there is a certain amount of warmth. In this respect, an increase in the temperature causes a rise in the sap which seeps out from the recent pruning cuts.

At Familia Martínez Bujanda, we are finished with pruning; “by Saint Blaise’s Day (3 February) vine pruning begins”, as the saying goes.  Although this task can, and in fact should, be done earlier; once the first winter frosts arrive so that the wounds can heal correctly. On previous occasions, we have already taken care of this process which, without any doubt, is one of the most important when it comes to ensuring the quality of the future harvest.

In this respect, “winter pruning” (there is also “summer pruning”, called “green pruning”, which we will describe at a later date) basically consists of removing the branches from the plants in order to modify the natural growth of the vine and adapt it to suit the needs of the vine-grower and the winery. At Familia Martínez Bujanda, we usually produce significantly less than regulations permit in the regions where we have vineyards (Rioja, Rueda and La Mancha). Consequently, pruning is fundamental for controlling the production of our vineyards and for the balance between bunches of grapes and vegetation. The Greeks and Romans wrote winegrowing manuals thousands of years ago, explaining how to carry out pruning, and as such there is little more that we can add concerning the importance of this vineyard task.

After the ‘weeping’ of the vines, the next phenological stage is that of the ‘bud burst’. Bud burst refers to the moment the vine sprouts, which will normally occur in spring and which manifests itself when the buds start to swell and shoots become visible, a cottony substance, after which the aforementioned moment of the cycle is named.

Sprouting, and also the moment at which it occurs, is highly important for the quality of the future wine and, once again, the phrase book, popular wisdom, offers us the clues: “March wine for the master; April wine for me and May wine for the devil”. In other words, the best time for bud bursting is in April.