Since when has wine been stored in barrels? 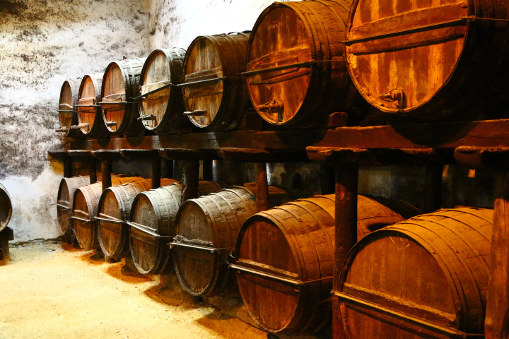 The earliest evidence of vine cultivation dates back thousands of years. Viticulture is as old as it is a dynamic, ever-changing trade. The world of winemaking sticks to all kinds of tradition, old and new. The methods used in winemaking in the ancient world were quite different from those we use today.

Concerning storage, amphorae were used to store and transport wine for thousands of years. Amphorae are terracotta containers found in Ancient Rome and Greece. They were used for the transport and shipping of various products, liquid and dry, such as oil or wine. Amphorae were easy to make, their handles facilitated handling and shipping, and the tapered bottom allowed upright storage by embedding them in sand, keeping some distance between them for safe, stable shipping.

However, transporting wine by ground was a much more difficult task. When carried in carts, amphorae would easily break on the road.

Interestingly, people would not drink aged wine in Antiquity, since it rapidly deteriorated into vinegar. The Romans and the Greeks preferred young, fruity wine.

As the Roman Empire expanded in the first century BC, the Romans saw that the Gauls stored and transported beer in wooden barrels, so they adopted this method for ground transportation. Following the lead of the Roman legions, merchants adopted wooden barrels too, since they were stronger and lighter than amphorae; moreover, they could be turned on their side and rolled easily.

The appreciation of wine aged in wooden barrels increased with the passing of the years. Wine transported over long distances in barrels did not deteriorate; on the contrary, it tasted better!

After the fall of the Roman Empire and the Barbarian invasions, during the High Middle Ages, much of the knowledge and techniques used by the Romans fell into oblivion, including the method for storing wine. Wine continued to be stored in wooden barrels, but techniques such as burning sulphur inside dry empty barrels to kill all bacteria and prevent wine oxidation had to be rediscovered. But this is another story…

A curious fact: the most frequently used type of wood for wine ageing is oak. This is so because oak has certain properties that make it suitable for wine barrels – it is dense and bendable –, but also because oak trees were more abundant in Europe than acacia, chestnut trees or cherry trees.