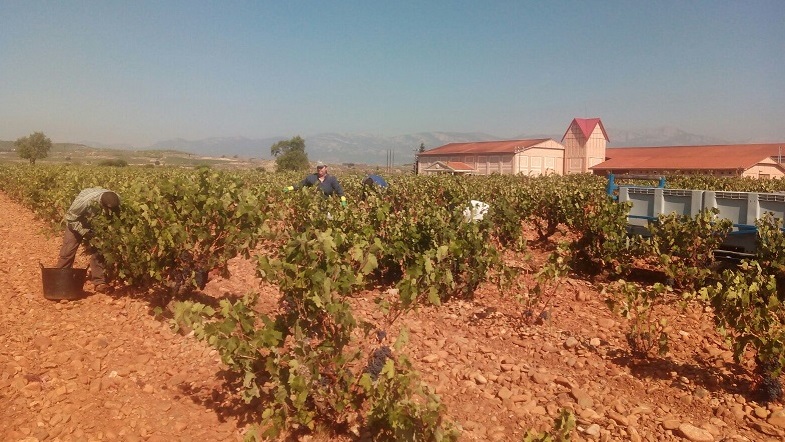 Harvest in the Rioja region is looking very good after at least three consecutive clearly abnormal harvests. In this respect, 2013 was an atypical year, more similar to those that were common until the end of the eighties: cold years with difficult harvests in late October, which had little or nothing to do with typical twenty-first century harvests which are warmer, earlier and in line with the changes brought about by climate change. In fact, that year, Familia Martínez Bujanda decided not to bottle Finca Valpiedra because we understood that it did not meet our usual standards.

In 2014, Rioja suffered serious health issues, although the early harvests, supported by the microclimate of Finca Valpiedra and the policy of Familia Martínez Bujanda designed to control the alcoholic content and not give in to the ‘temptation’ of over-ripening.  This enabled us to prevent greater problems and we managed to harvest our grapes before the rain and heat at the end of September and created the ideal habitat for the development and rapid spreading of botrytis. In fact, Lauren Rosillo defined 2014 as one of the best in recent years at Finca Valpiedra.

Last year’s harvest was once again totally atypical; with fast ripening, at practically ‘microwave’ speed, resulting in the earliest harvest in the history of the Rioja region. Although the quality was beyond any doubt, as our technical team says, it gave us a fright because, at least to begin with, we did not know how the wines were going to react using grapes which, although they respected all of the quality parameters, had ripened so quickly.

In 2016, having barely started the harvest with some white grapes and the first part of the red grapes, the outlook is for a great year if the autumn rain does not prevent it. The year has been dry, particularly in the summer with the absence of the typical August storms which, although sometimes feature hail, usually refresh the vineyards in Rioja.

Nevertheless, the control of the strength and green harvesting (dropping bunches before significant flowering) have been fundamental to ensuring that the plant reaches the end of the cycle with vegetation at Finca Valpiedra, allowing for full ripening. We have had a lot of heat in Spain but more limited amounts inland than on the coast, also alternating with cooler days. In other words, excluding the first long week of September, the periods of true heatwaves have been pretty short and even scarce.

From September 12th onwards, the north wind, known in the area as the ‘cierzo’ appeared with cool, sunny days and, above all, cool nights; the ideal weather for ripening. Plant health continues to be excellent and, at a glance, the vines and bunches, with small grapes due to the drought, look simply spectacular. At Finca Valpiedra we will carry out a staggered harvest, selecting plots and varieties, whilst the weather allows it: starting with the gravelly areas that are closest to the river, these vines are being used to produce our Cantos de Valpiedra, and moving on to the higher, more clayey terraces of Finca Valpiedra.

Enotourism is one of Familia Martínez Bujanda’s firm commitments and the landscape of Finca Valpiedra is one of the most spectacular in the Rioja region. You can learn everything that we are telling you first hand at the vineyard through our different visits.