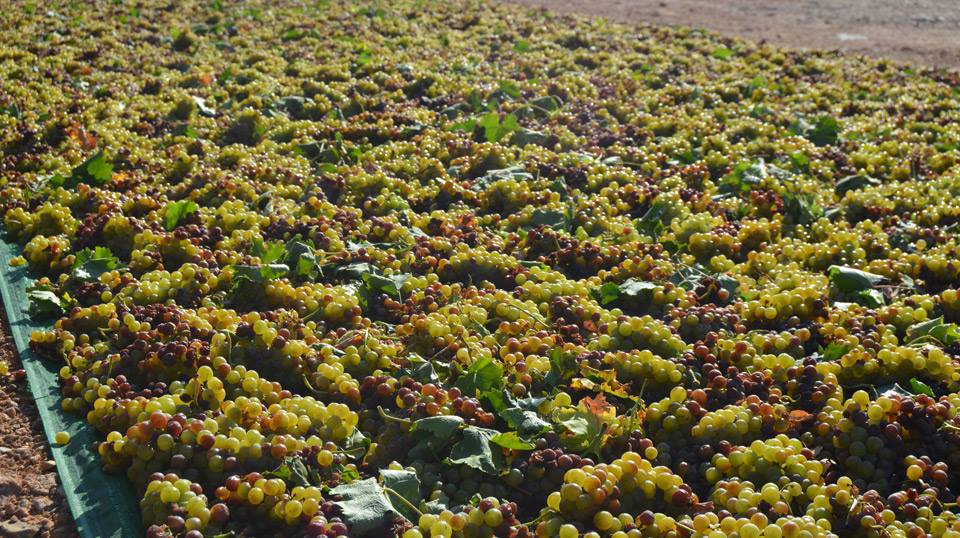 Working flat out, starting significantly earlier than last year, yet sooner than a normal campaign, the harvest at Familia Martínez Bujanda is almost complete in La Mancha.  At Finca Antigua, where we started with the Muscatel on August 11th, we expected to finish by the middle of September.  Harvest is now over in the Rueda region; at Finca Montepedroso it was comfortably completed in two (2) night shifts, on the 25th and 28th of August.

In La Rioja, at Finca Valpiedra, we also started on September 1st, beginning considerably earlier than usual, and with little more than twenty days ahead in which to get all of the grapes into the winery, the harvest of which will be the subject of a forthcoming post.

The early start, as was the case in 2015, has marked the campaign at Finca Antigua, where in normal circumstances we are entering October at the end of the harvest, but this year all of the grapes were in the winery by the middle of September. It was a quick harvest, marked by the drought, as was the case throughout La Mancha and practically all of Spain, although our technical team anticipates that it will be a good year in terms of quality.

We have drip irrigation in 95% of our vineyards, which together with the usual harvesting methods featuring the unloading of bunches and plant management, enables us to ensure that the grapes enter the winery with a perfect balance between alcoholic ripeness (alcohol content) and phenolic ripeness (of the skin and seeds which contain the phenolic compounds). The imbalance between both types of ripeness is one of the common issues of early campaigns such as the current one.  Here the alcohol content quickly shoots up, due to the drought and the heat, but in which the plant needs more time in order to polish and round off the tannins that will mark the quality of the future wine. In this respect, as we have mentioned on several occasions, the timing of the harvest is the most important decision that the technical team must make each year, although, if the initial work in the field has not been carried out properly to this, from the time of pruning, it is difficult to guarantee the necessary balance in ripening. That said, in addition to the economic cost of the work in the fields, high-quality vine growing has a production cost and, for example, our average yield at Finca Antigua will barely exceed 4,000 kilos per hectare this campaign (40% lower than that of last year), in other words, nothing like the usual production levels of the denomination of origin on the extensive plains.

In Rueda, we cultivate 25 hectares of Verdejo grapes in the area surrounding Finca Montepedroso and, apart from the frost damage which will reduce our production by 30%, the other prominent incident of the meteorological year, the drought, which has been severe in the Ribera del Duero region, will barely affect us. In fact, we have the option of drip irrigation (which we only use when it is strictly necessary) and we have not used it this season because in July we recorded rainfall of close to 50 litres per square metre which refreshed and invigorated our vineyards, although the key, once again, lay in controlling production levels using vine-growing practices.

In short, despite the general issues with the harvest throughout Spain, at Familia Martínez Bujanda we are satisfied with and confident about the quality of the 2017 vintage which will of course be affected from a production point of view, but which has also given us high-quality grapes with which to make great wines.