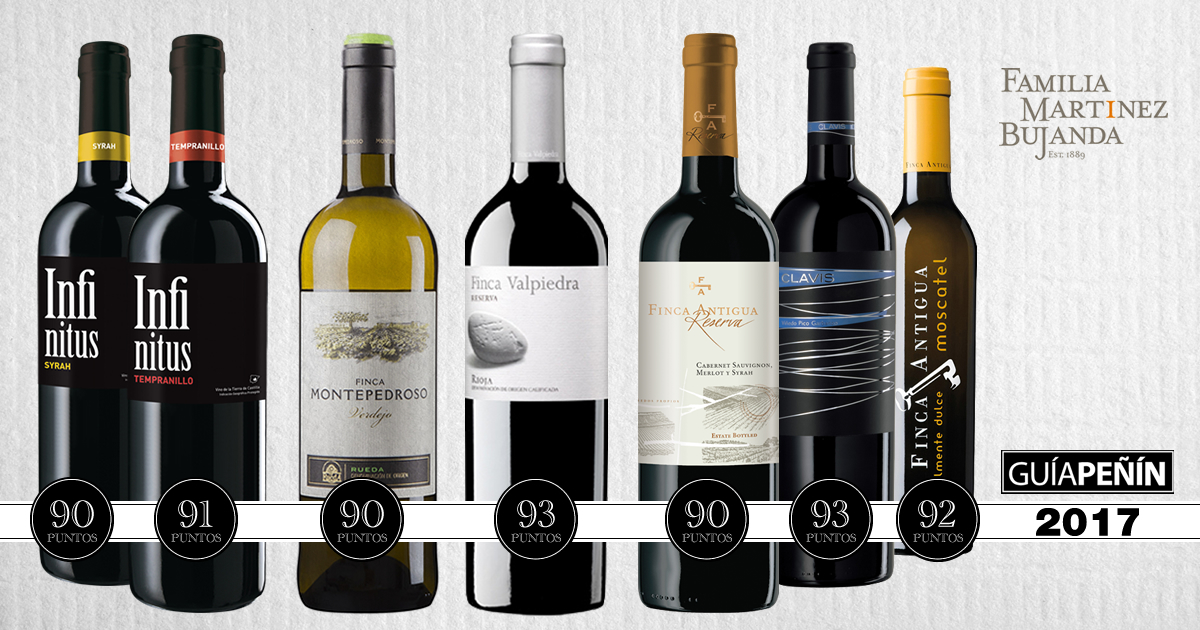 Whilst the Peñín Guide retains the ‘brand’ of its founder, José Peñín, it has been run by the oenologist, Carlos González, for several years, and become the most important and most prestigious guide to Spanish wines. It is, without any doubt, the guide most often consulted by wine professionals and enthusiasts. The publishing house has just published the twenty-seventh edition of the guide, containing a record number of wine ratings, reaching 11,500 references including an excellent result for the wines of Familia Martínez Bujanda.

Both of our fine red wines, Finca Valpiedra 2009 and Clavis 2008, obtained a score of 93 points. Finca Valpiedra 2009 is a red wine that is full of honesty with which our technical director, Lauren Rosillo, displays the genuine character of a vineyard that is as special as Valpiedra, and which offers a different expression at every harvest depending on the meteorological conditions.

Clavis is a vineyard designated wine from Finca Antigua. It is made exclusively using grapes from the Pico Garbanzo plot, barely four hectares crammed onto an atypical spot in an area of calcareous clay soil with a bunch of varieties planted in a disorderly manner (Garnacha, Cabernet, Pinot Noir, Mazuelo and others).  Originality, personality and character!

One of our most special wines, Naturally Sweet Finca Antigua Moscatel 2015, was awarded 92 points. We call it special because the grapes, which also come from a single plot, are dried in the sun after harvesting, spread on mats on the ground. This spectacular sight can be seen at the end of August every year at Finca Antigua.

Ciclos de Finca Antigua 2010, which we now bottled as Finca Antigua Reserva, combines varieties such as Merlot, Cabernet Sauvignon and Syrah.  All of which our technical team selects every harvest in order to make this wine which, brings together the best of our vineyards and which also joins the excellent wines listed in the Peñín Guide with 90 points. The same score was achieved by our white wine from Rueda, Finca Montepedroso 2015; one of the most authentic Verdejos, as defined by Luis Gutiérrez.

Special reference should be made to our Infinitus Tempranillo 2015 and Infinitus Syrah, from our Cosecheros y Criadores winery (Vinos de la Tierra de Castilla) which are excellent values and have for the first time joined the club of excellent Spanish wines, with 91 and 90 points respectively.

Familia Martínez Bujanda will take Finca Valpiedra and Clavis to the 27th edition of the Best Spanish Wines Show organised by the Peñín Guide, exclusively for those wines scoring more than 93 points, on 27 October in Madrid. We summon all wine enthusiasts to attend, but not without first reminding you that at Familia Martínez Bujanda we believe that whilst the point scores serve as a guide, they should not be the principal reference when choosing a bottle, rather it should be us who evaluates whether a wine and its price, really meets our expectations.