To speak of wine in the United States, it´s to talk about California wine. Since the arrival of the first European settlers in the nineteenth century to the present, California is considered one of the most prestigious winemaking regions, rivaling Europe and emerging regions such as Argentina or Chile.

The history of California wine begins like most of American history, with the European conquest of America and the arrival of the first Spanish missionaries in the nineteenth century who planted the first vines to produce sacramental wine in Baja California, specifically in Sacramento. During the rest of the nineteenth century settlers were planting Vitis Vinifera from Europe, providing the quality of old world wines produced in that region. 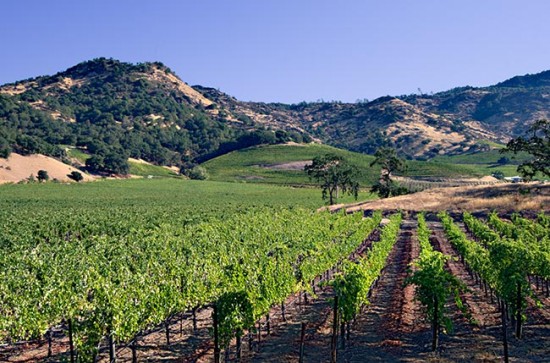 Currently, 90% of the wine produced in the United States with 221,000 hectares is in California. If it were an independent country, California would be the 4th largest producer of wine in the world. The integration of the wine in the lives of Californians is only comparable to what happened in New York. But the fundamental difference from the producers of the East Coast lies in the European origin of strains of wines produced in California; they produce wines that have received the highest accolades in the most prestigious competitions since the late 1900s.

California has built an image according to the majority of Europe’s best wine regions. And the attitude of U.S. consumers regarding the old continent is synthesized primarily in finding quality wines at the best price.

One difference between California with Europe is that most lack their own wineries or vineyards. Part of the essence of California wine is that anyone can start a winery, even without a single vineyard. The importance is to get adequate facilities and grapes. This opens opportunity to the lack of large initial capital. This is something that allows the grower the ability to become famous if they make a compelling wine.

Another aspect to point out with this division between viticulture and viniculture is that there is more creativity to use less settled varieties than Sauvignon, Chardonnay, Cabernet and Pinot Noir. The preference for these options of more risky elaboration is in the varieties Syrah, Mourvèdre or Roussane, and Italian Barbera or Sangiovese.

California is a locomotive that has been motion for decades. It produces a lot of very high quality wines that take full benefit and potential of the vineyards of Napa and Sonoma and use very efficient methods of planting and production. The last plague of phylloxera in 1990 opened the door to the crop in other regions of the state, as there is a vast territory with optimum qualities for such activity. Stretching for almost 2,000 km in length California is the second largest state in size within the U.S., after Texas. While there are different areas and regions, the most prominent are the North Coast, Napa Valley, Sonoma, the Central Valley and Central Coast.